Morocco is defintely winning the game of surprises. From pinkish and chaotic life in the cities, where you run from cars, scooters, 🎠horses and sellers, to natural highlights of the High Atlas mountains, Atlantic ocean, Sahara desert, waterfalls, 🐐 goats climbing in the trees or 🐒 monkeys stealing your food. Even so, I left it confused, as It is hard to tell if people around were honestly nice or they just live under the tipping culture. But let me start from the beginning😉

Medina, with lots of hidden treasures, is one of the unlimited energy sources in Marrakech, which I was eager to explore. It is noisy and full of life. But also unexpectedly calm if you find a right spots. 💙 Starting with Riads – one of the most traditional Maroccan houses. I give highest recommendations to stay in some of them during the visit! Their designed with the garden in the center, which varies from cozy to fascinating, especially with all the Moroccan colors. 🔥Funny though, as most of them are in Medina and you will definitely get lost while looking for it 🤭 You think I did get lost? Nah, the person working there was leading me and my friend around for some time, till we started to feel that we would succeed in orientation games, if there would be any competition!

What else to be found in Medina? Souk! Even if you will not be looking for it, it will find you. Full of everything – from well known carpets, lamps, leather bags and shoes to Argan oil products, fruits and vegetables. 🍊I love these markets, even if I always play the game of not to watch in the eyes of the sellers, as only from one look I would loose the game of bargaining (Jap, indeed, I am so bad at it!). 😎Besides that, I would suggest o enjoy the life in Jama El f’na – main square of Marrakech, which turns into mini river of people and sellers, who would offer you fresh squeezed juices, hana tattoos or even cobra dances! Lots of street performances are also there. But if you start making pictures, make sure to tip, otherwise they will catch you whatever you go! 😶You can also step a bit aside and enjoy this noisy lifestyle from Mhamid Marrakech. It is also where you can find a nice horse ride to further places. In a carriage, of course. Getting outside of Medina – Bahia Palace, El Badii Palace and Saadien’s Tombs are interesting sights to visit. 🌙

While heading back to the Medina and finding ways around the other part of it, make sure to find Le Jardin Secret, it proves that lot of interesting areas are hiding between the walls. 🌵 One of the spots, which is not open for outsiders, but would be important not to miss as a Muslim is Ben Youssef Mosque. Meanwhile others could be heading to Jardin Majorelle – a bit further, in a very interesting and modern n-hood! 🌺It has lots of blue 💙

Geography lessons would have been much more interesting if we would have a chance to see places by our own eyes. 👀 Such as High Atlas – it has this reddish texture, which is taken as a symbol for Berbers living around in the small mountain villages. On the road you might find some villages-museums, made by huge cinema industry. 🎥 The Mummy, Alexander, Babel, Gladiator, Inception, American Sniper, Mission impossible, Game of Thrones and lots of other movies and TV series were filmed in Morocco. You can live a scene in the movie while visiting Atlas Corporation Studio, which is on the way through High Atlas mountains.

Berbers make around 40 % of the population in Morocco. Living by preserved traditions, with big families and having their own family businesses. 🏘 Life in Oasis can be great if smart cultivation methods are in order, otherwise – lack of water will ruin the harvest. Some of the Oasis are beloved for leisure time, such as Todgha gorge, where locals come to cook Tagine, where tourist come to make pictures.

Most known business in Morocco is producing and selling hand woven carpets and rugs. It is super well developed 🗝- . If you can not take it with you, it will be sent to your home. If you can not pay the prices, you can bargain. If you don’t like the options, sellers will find more. If you don’t understand anything about the industry, just sit down and listen hours of explanations. While women are making them, men are selling them. During my adventures in Morocco I haven’t seen any female seller, while have been in lots of selling points, as if travelling with a group, tour guides will never miss a chance to bring you to some. 🔮Perfect example of cooperation between businesses? 🤷‍♀️

‘-Do you want some Berber whiskey?

-Oh, I though you don’t drink.

-We don’t. Berber whiskey is a mint tea. With sugar. Loads of it.’☕

I haven’t been asked so many times in my life how I am doing than during the time in Morocco. Locals love to talk about you, your family, your country, your life. Things you don’t talk with strangers back home.🙆‍♀️ Even more, they tell you a lot about their families, with lots of small details, which is interesting and a bit uncomfortable at the same time. 🤨 During all those conversations I was fighting a demon inside me trying to understand, if at the end of the day people were honest or they wanted tips. Especially if those talking were tour guides, sellers, housekeepers, drivers… One thing for sure, Morocco is country where you leave tips. I would only wish someone would have told me how many and when, as remembering those moments I still feel confused. 🙈 I hope they are not giving me to the djinn.

“Mama Africa“, – singing Bedouin kids while watching night stars over the sky in Sahara. ⭐And I haven’t seen so many of them ever in my life. Stars, not kids. I guess because sky there is super clear – no lights to cover their beauty. Nevertheless, Sahara was playing extremes: boiling from the heat in the day time and freezing out in the night time.

It is something, which I can’t describe by words. Sahara is the largest desert in the world. Even if we saw just a tiny part of Merzouga dunes – the sand was all around. You know it is extremely dangerous, if you would get lost there without water and shelter. But it is still do damn stunning that you just stay hours and hours riding your camel around it. 🐪 Nevertheless, you also understand how spoiled you are when spending a night in the Bedouin tents. Oh, I put all the clothes I had on me, but it was still freezing! 🏠Kids were just laughing their souls of this western world struggle while cuddling closer to their camels. Most of the time they live in the dessert. They don’t go to school. They stroll with tourists, as this is their source of income. Most of them are young boys. And they call themselves – free man. 🌍Who am I to doubt that.

HAVING LUNCH WITH macaQues in OUZOUD

Once a lovely little creatures, Macaques near the Ouzoud waterfalls already know how to get some treasure from anyone visiting the surroundings. 🙉The tallest waterfalls in the North Africa attracts a lot of visitors, and sure thing – if you have a change, don’t miss this glance. It is indeed something magical. Even more, it brings some wildlife experience. If you like that – bring some peanuts with you – Macaques will definitely join you for a lunch with a view. 🔥

Just few hours away from Marrakech, a lovely city of Essouira is waiting for the tourists to enjoy its beautiful beaches. Once under the Portuguese power, the windy city is still full of its vibe – lots of fresh fish, azulezu, smell of the Atlantic coast. 🌊Here you can enjoy horse riding in the beach, surfing, visit to the Medina, where local market (better known as le Souk) is offering good prices for Morrocan souvenirs, feel like in the museum while exploring all the different fishes caught up in the Atlantic ocean in the Fishing port of Essouira (if you don’t mind a smell, as it is really intense there), walk around the wall or simply enjoy the sunshine. Even so, it is touristic, meaning that your full relaxation can lead to happiness of some pickpockets, so it is worth to be aware where you put your bags. 🎒

And you know what.. I knew that 2020 is going to be a year, once I saw goats climing up the trees. for localS it is estonishing to see people spending hours in front of the Argania trees, but I guess it is a guilty pleasure to see unknown

Argan tree fruits are the perfect snack for the goats and they are also known of the superpowers, which is suited for humanity of the form of the Argan oil. What superpowers you might ask? Healing, purifying and making your skin glow. Whatever it is true or not I will leave it to find out by yourself.

Travelling around Morocco is recommended to be planned in advance if you would like to feel safe all the time. You can check local busses between cities, as they offer the best price. You can enjoy the road with your own car while road tripping. Or just order a transfer/day trip services from travel companies, as there are a lot of them, so you can choose anything which is suitable for you! 🙂 During our trip, few times at the evening we have been approach by local police officers reminding to keep an eye on ourselves – not only while walking in Medina at night, but also while sitting in the park after the sunset🌚. As they said – two young foreign ladies can get unneeded attention and be an easy target for pickpockets. 🚶‍♀🚶‍♀Either way, if you avoid the dark and don’t keep your belongings exposed – life will be much more easier.

What about Rabat, Casablanca, Fez? It is coming with the next adventure in Morocco. Meanwhile the world of djinns could be found in the book of Tahir Shan ‘The Caliph’s House: A Year in Casablanca’. Books let you travel even in the vivid times!

So read and… meet people.

That’s the only advice about traveling, which is worth listening. 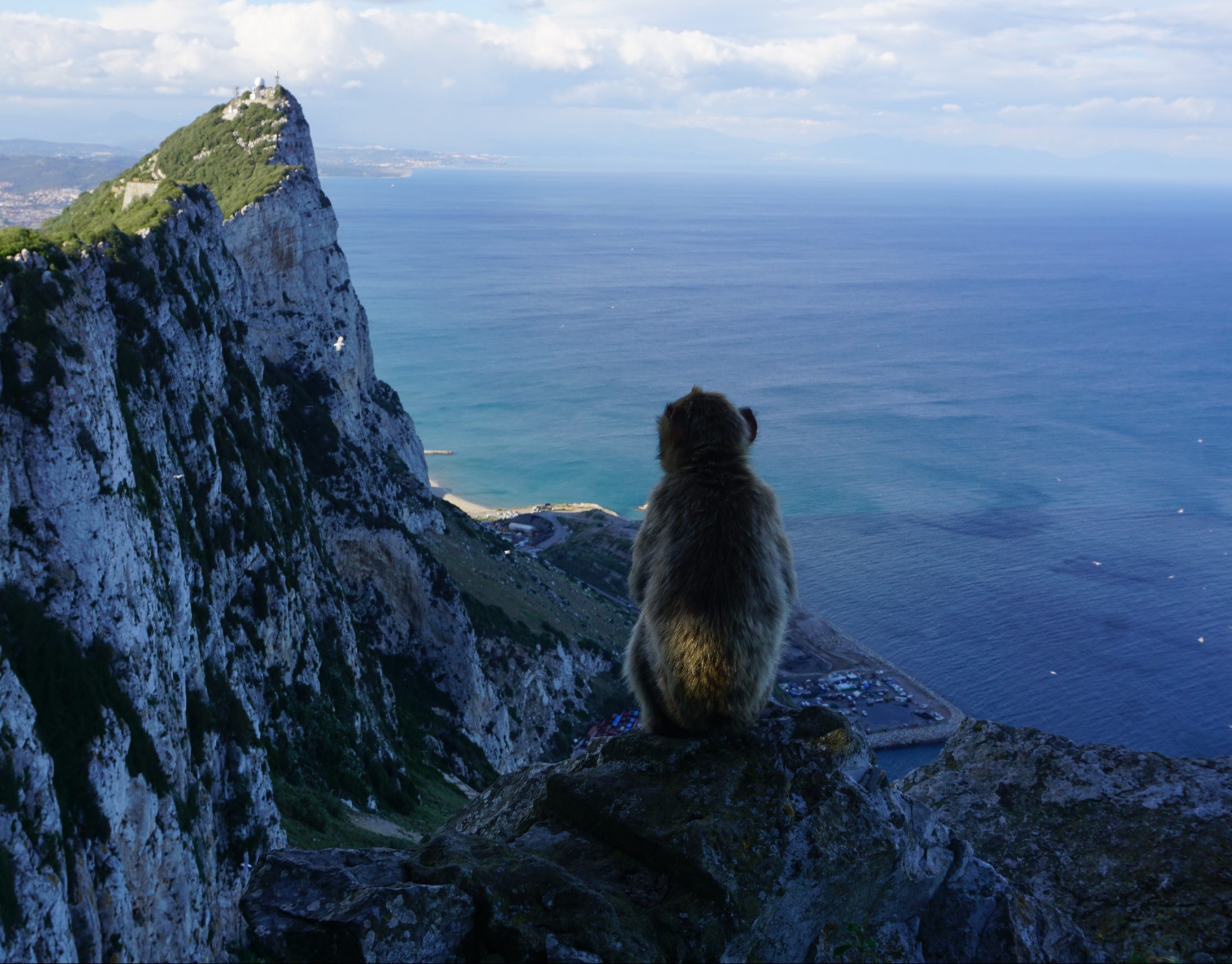